Special thanks go to:

Dave Pecota who has authored much of the text on the history pages and provided many photos and research information! Thanks, Dave!
Nero Matthias for the photos of some of the Micki Trains from Sweden.
Sharon Nowlin who has been a source for many vintage toy catalogs and advertisements that have helped document the history of these trains. Sharon has an e-Bay store at: http://stores.ebay.com/Found-Treasures-by-Borzoi-Booklady
Judy's Old Wooden Toys: Toy articles and for sale: http://www.oldwoodtoys.com/

This History Pages are split into two pages because they are growing quite large. Covered here (so far) are:

As explained on the main page, there are many manufacturers of toy wooden railroads that all use the same basic track and train sizes. We often say that these sets are "BRIO" compatible. However, it's not because BRIO is the oldest train manufacturer, but rather because BRIO is one of the best known names in Wooden Railroads and they captured the market in the mid-1900's. Although BRIO was started in 1884 by the "BRothers Ivarsson of Osby", Sweden, they didn't start making wooden trains until 1957, and they weren't readily available in the United States until around 1977 or so.

http://www.eric.ed.gov: The link to the specific document is too long; search on Habermaas on this page and you'll find a PDF of "A Parent's Guide to Imaginative Block Play", a brochure by T.C. Timber with some historical information included at the end.


Through the years, Skaneateles Handicrafters (SH) trains could be found under other brand names. Playskool, in particular, carried the SH trains under their banner.

In 1980, Habermaass GmbH (of Germany) acquired the Skaneateles Handicrafters company and the train portion of the company changed their name to T.C. Timber. T.C. Timber trains are typically carried by high-end toy stores, and are not typically found in department stores. In 2003, Habermaas GmbH became known as HABA USA, a wholesale distributor of HABA, T.C. Timber, TOGU, and Spielstabil branded products.

Dave Pecota began writing me about some of the earlier Skaneateles Handicrafters trains (I'll call them SH trains from here on) that he had purchased. His interest sparked some additional research, and this page was the result!

I had seen some T.C. Timber trains in a few stores, but they were very expensive, and the trains were very traditional and "blocky" as compared with the newer trains from BRIO and Learning Curve (in the mid 1990's). In the 90's the train track design was quite traditional, and matched the current Vario-System design.


Some photos of this Playskool set are shown below: 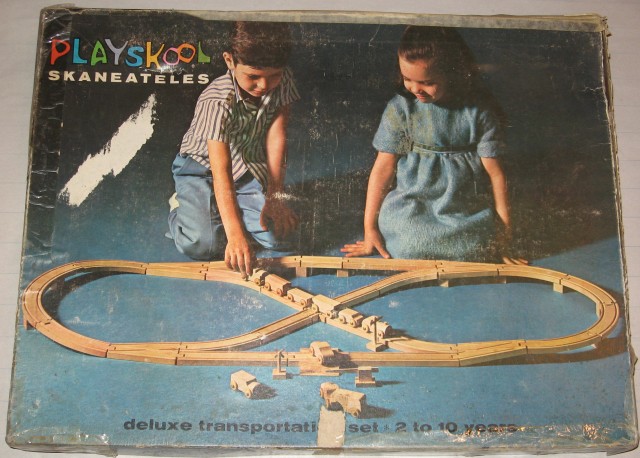 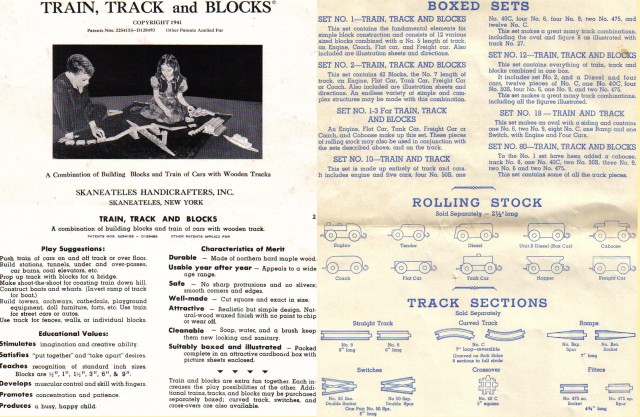 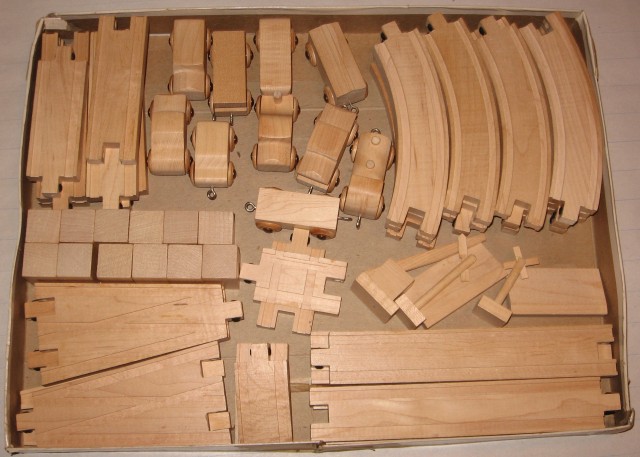 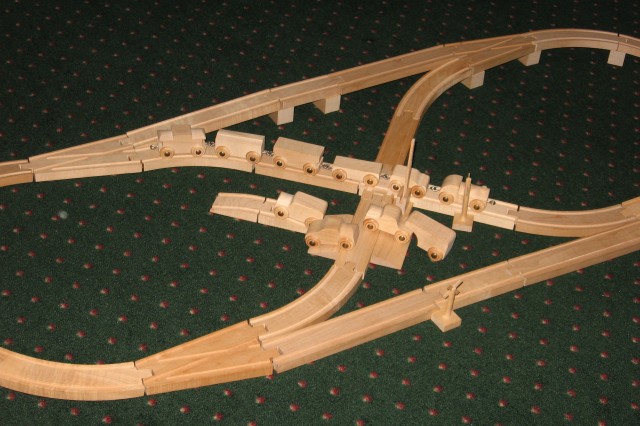 The Jack Built Toy Manufacturing Company was very active in the wood toy train and track market during the 1950’s.   Jack Built was based in , with a factory located in and offices listed in both and .   They also had a show room on in . Many of the boxes that contain Jack-Built Snap Trains contain the words "Made In Japan", so it is likely that while headquartered in the US, the trains may have been manufactured in Japan. The JB company (Ben Orel) was issued US patent #2847798 on Aug 19, 1958 for its snap-style connectors.

Jack Built trains are similar in size and appearance to those produced by the Skaneateles Handicrafters of New York, but use novel (and patented) “snap” couplers to connect both trains and track

The little snap couplers allow trains to be connected or disconnected without removing them from the track.   The couplers also provide enough “play” in the connections to allow the trains to easily negotiate corners and move up and down bridges and ramps, but are strong enough to prevent those frustrating “accidental” disconnects.

The track snap couplers utilized in the track sections provide some lateral and vertical movement in connecting track pieces.  Double-sided curve track could have given the sets additional layout flexibility.   However, Jack Built (B. Orel) wasn’t granted the patent for this type of track until 1961, and it’s unclear whether this modified track actually went into production.   Jack Built wood train sets apparently disappeared from the marketplace about this time.

Jack Built used high quality hardwoods for their toy products.   The sets were well-made and durable, and were designed for 2 to 10 year old children.  Child safety was a high priority.   As their catalog indicates, the sets provide “train fun that does not need adult supervision and eliminates the hazards of electricity”.  Their product “educate(s) and develops the dexterity of the child through the use of shapes while arranging the parts in their proper position”.

Many educators seemed to agree, as many sets found their way into schools and child-care facilities all over the country.   Some may be soldiering on in this capacity to this day.

Jack Built produced a wide variety of accessories for use with their sets including a water tower, trestle, tunnel, station platform, signal signs, telegraph poles and even a roundhouse with turntable.   In addition, many different “road” vehicles were available including a gasoline tanker, double-deck bus, bulldozer, steamroller, semi-truck/trailer and dump truck. Wood blocks of various sizes and shapes were also included in many of the sets.

All of the trains, planes, boats, tracks and accessories appear to have been produced only in natural wood.   None apparently were painted or received decorative paint details or stickers of any sort.

Jack Built trains and vehicles can be used with any Brio-compatible train set, but the unusual track couplers will not work with any other types of track.

In addition to their Snap Train, Snap Plane and Harbor sets, Jack Built sold a variety of toy products including crayons and “wipe-off” coloring books, wood looms and children’s books.   Their sales literature indicates that Jack Built Toys was a division of Albin Enterprises.  But both companies … or at least the company names … seemed to have disappeared from the toy product scene by the mid 1960’s. 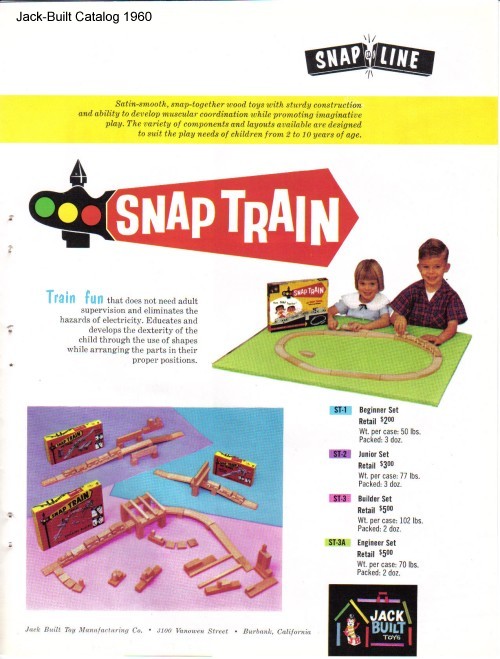 Micki Leksaker is a family-owned company that began in 1944 with the introduction of the first Micki wooden figure. They currently (2007) have 55 employees, and are located in Gemla, Sweden.  The trains are of the simplistic design such as Haba and Heros trains. One of the unique features of the Micki trains are that all the track has only female cutouts, and they use small plastic connectors to join the tracks. I don't know much about the history of Micki Leksaker, but I got some nice photos of an older set from Nero Matthias that I've inlcuded below:

Photos below are some older Micki trains: 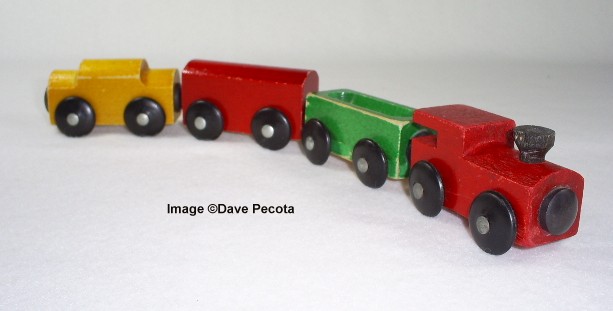 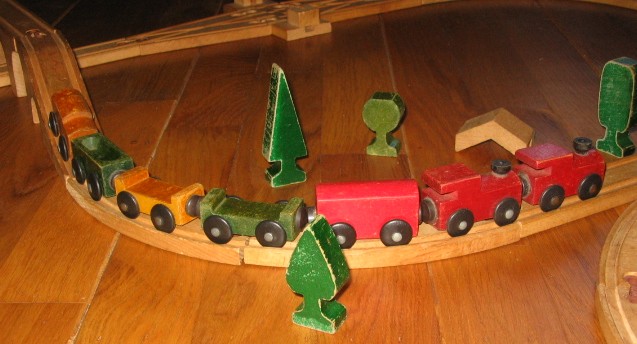 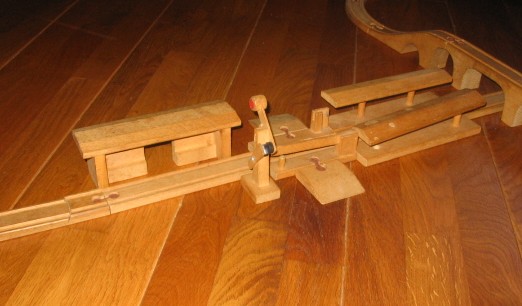 If you look closely, you can see the plastic
connectors used to connect the female-end track
pieces. 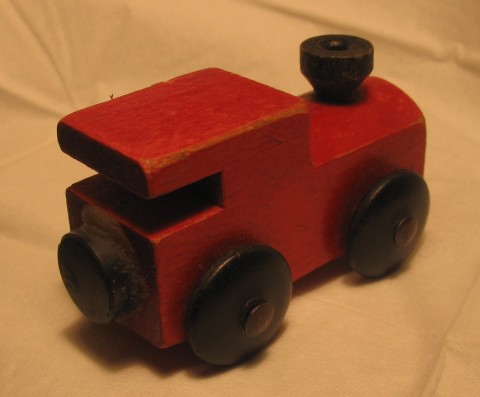 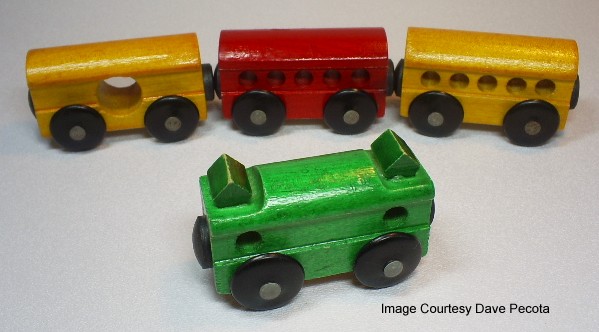 A nice history of BRIO can be found on thier own homepage:

A have noticed a small conflict in information I've found on the web. Dr. Toy's "History of Toys" indicates that BRIO first produced a figure 8 train set in 1884, but other information I've found states that BRIO didn't start making trains until 1957. If the Dr. Toy history is correct, then I would expect that the figure-8 train was probably a larger "toddler" train and certainly not on the Vario-System scale used today.

The first trains were 4 card sets with wooden wheels. It seems that by 1964 or so, BRIO was offering a selection of both hook-eye connectors as well as magnetic connectors.

Through the 1990's or so, BRIO trains were made in Sweden, and you will notice this on the emblems. More recently however, BRIO has outsourced some of its manufacturing to China, and the emblem now simply states "BRIO". I am not sure if there are still any BRIO products made in Sweden or not.

In the U.K., BRIO also used to make Thomas The Tank Engine™ trains. Since Learning Curve owned the license in the USA, these trains were not available here.